Girls’ Rights Are Human Rights: One Girl Scholars Produced a Street Play On Violence Against Women For Their Friends at School

For 16 Days of Activism in 2021, One Girl Scholars in Sierra Leone, supported by the programs team, put on a street play for their school-aged friends in Freetown and Tonkolili to learn more and talk about gender based and sexual violence against women and girls. The issues they weaved together in the narrative came from lived experiences, anecdotal evidence, the news and social and cultural systems they’ve seen operate around them.

One Girl’s Community Programs Coordinator, Feimie Kpayagula, who led the campaign talks to us about how it all went down.

What was the inspiration behind doing a street play as part of the 2021 16 Days of activism campaign?

The inspiration has been unfortunately the prevalence of sexual and gender based violence in Sierra Leone. Sometimes young people don’t even know what they’re doing or what someone is doing to them is wrong, so we wanted to engage the minds of the young people on sexual and gender based violence (GBV). We wanted to say to them - you may know someone or have seen someone experience GBV or be violent, and not realise that these things may be against someone’s human rights. This is why we wanted to aim our 16 Days of Activism campaign at a school-aged audience. 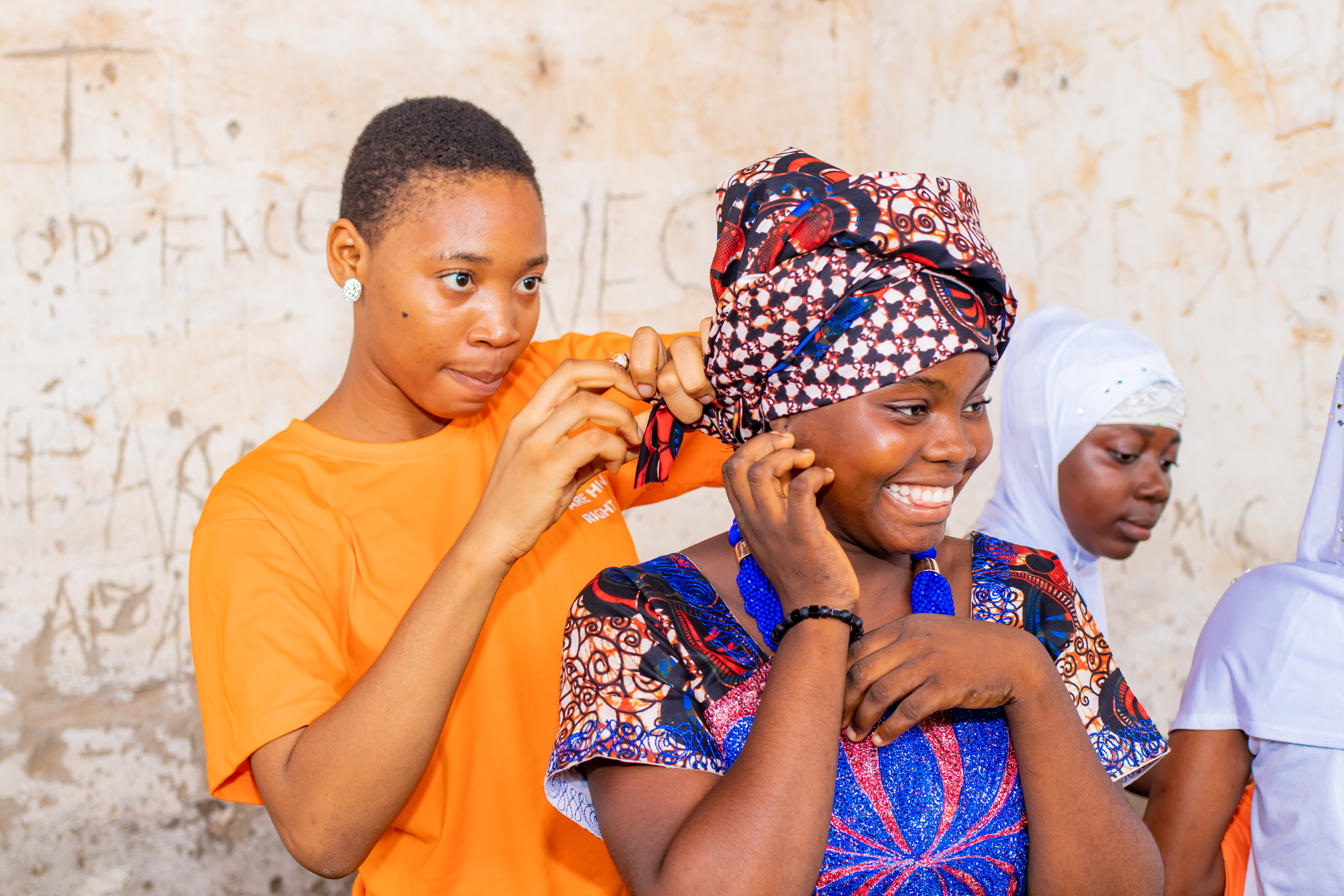 What was the process of working with the Scholars to put the street play together like?

We made sure our scholars were a part of every step of the process - putting the script together but also the acting and direction. We decided to have all girls play all the characters - even the male characters, it added a touch of fun and laughter to serious matters. 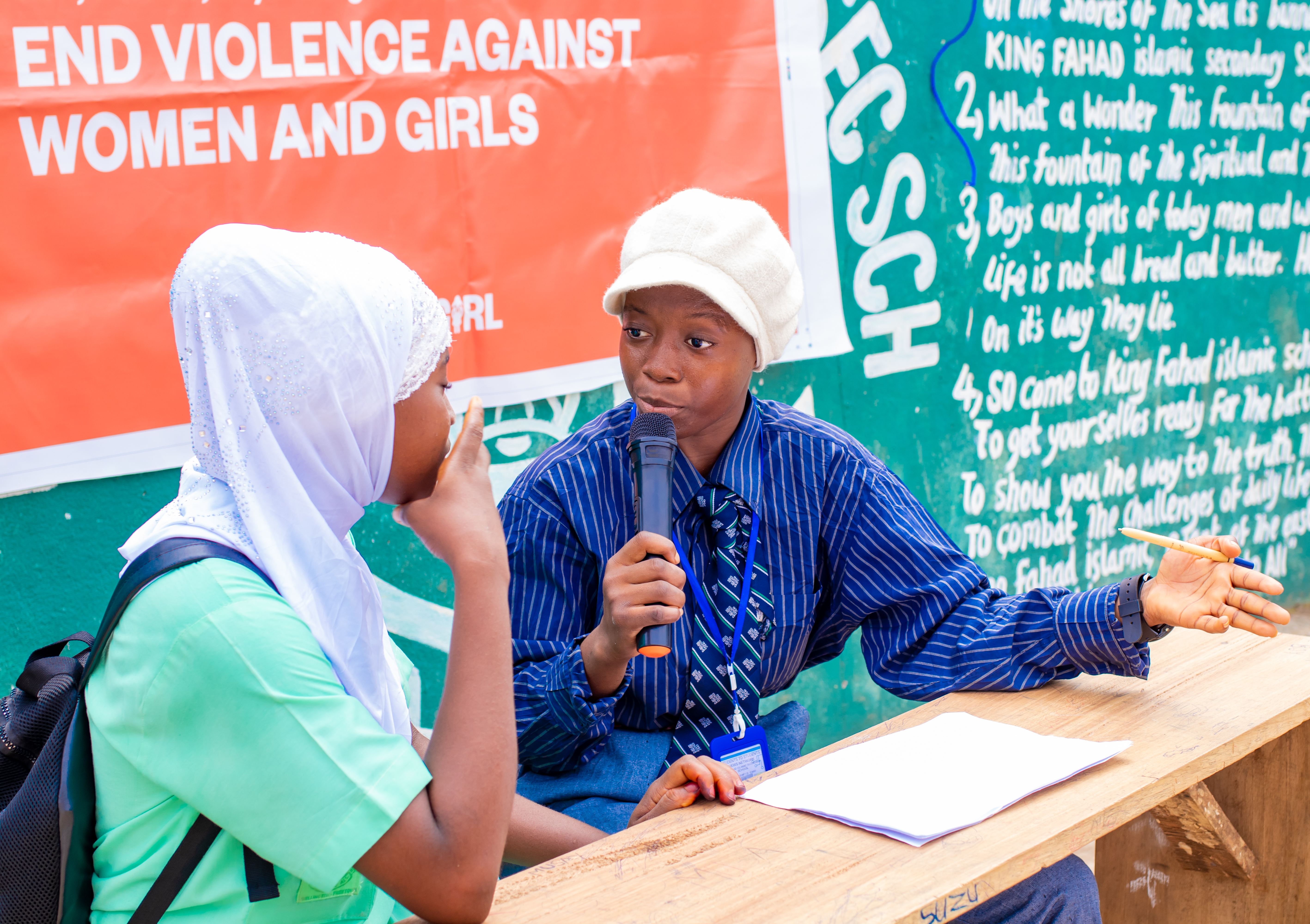 In general, some of them were acting and doing a play for the first time. They were a bit nervous, one of the first things we did was to convey to them that it is okay to fail, and make mistakes. What is important is that we try.

From rehearsals we could see some girls gravitate to certain roles and really shine. We saw girls help each other out with lines and acting tips. It was an uplifting experience for all of us. We didn’t coach them too much, these are all issues they’ve seen or heard or unfortunately experienced so we didn’t have to give them too much coaching.

All staff members involved have all had psychosocial training to watch for signs of distress and trauma but all Scholars were happy to be a part of it, confident about themselves and really wanted to be involved in a movement to spread this message and convey what is wrong. 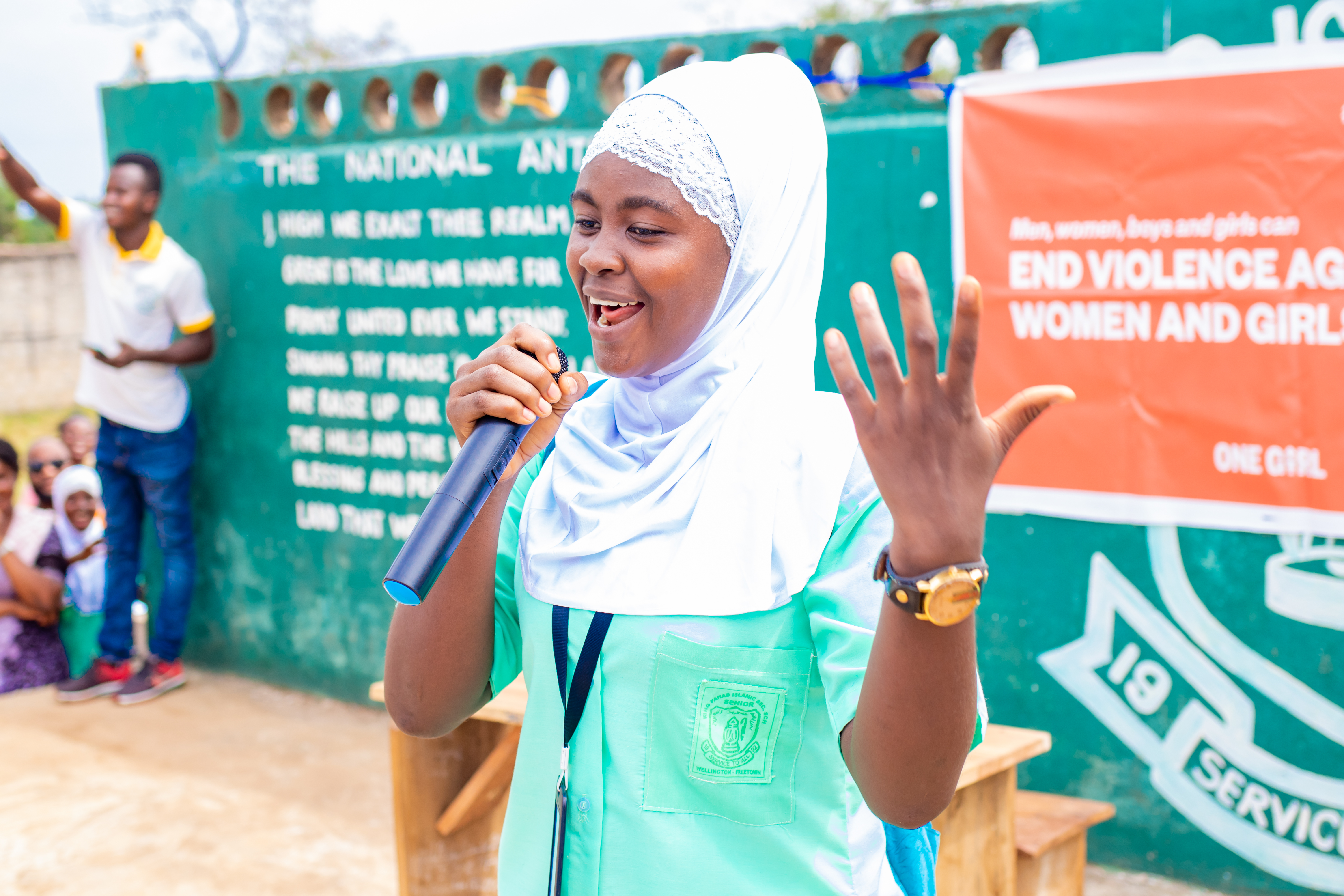 What were some of the issues and themes that were touched upon in the script?

We looked at how sometimes teachers harass students for grades. When we were discussing coercion, we realised that sometimes girls engage in sexual activity because their friends made them feel bad about themselves or their boyfriends threatened to leave, not because they wanted to be sexually active. We wanted to highlight these things to convey to the girls that no one can make you feel that way. It is your body, your choice!

Victim blaming is a huge thing, it's the girls fault always - ‘you smiled this way, your skirt is too short’ but that doesn’t matter because girls can wear the longest skirts but they still get harassed!

With regards to violence at home, some women in Sierra Leone society believe that if a man doesn't beat you, he doesn’t love you. Sometimes fathers or uncles may use violence to discipline their children or exert power. When a girl says ‘my boyfriend hitme’ or a woman says ‘my husband hit me’ she is immediately asked ‘what did you do?” We wanted to shed light on this, so that people know that this is wrong. Also the theme of the global 16 Days of Activism campaign was End Femicide. At the end of the day, everyone deserves to be safe. 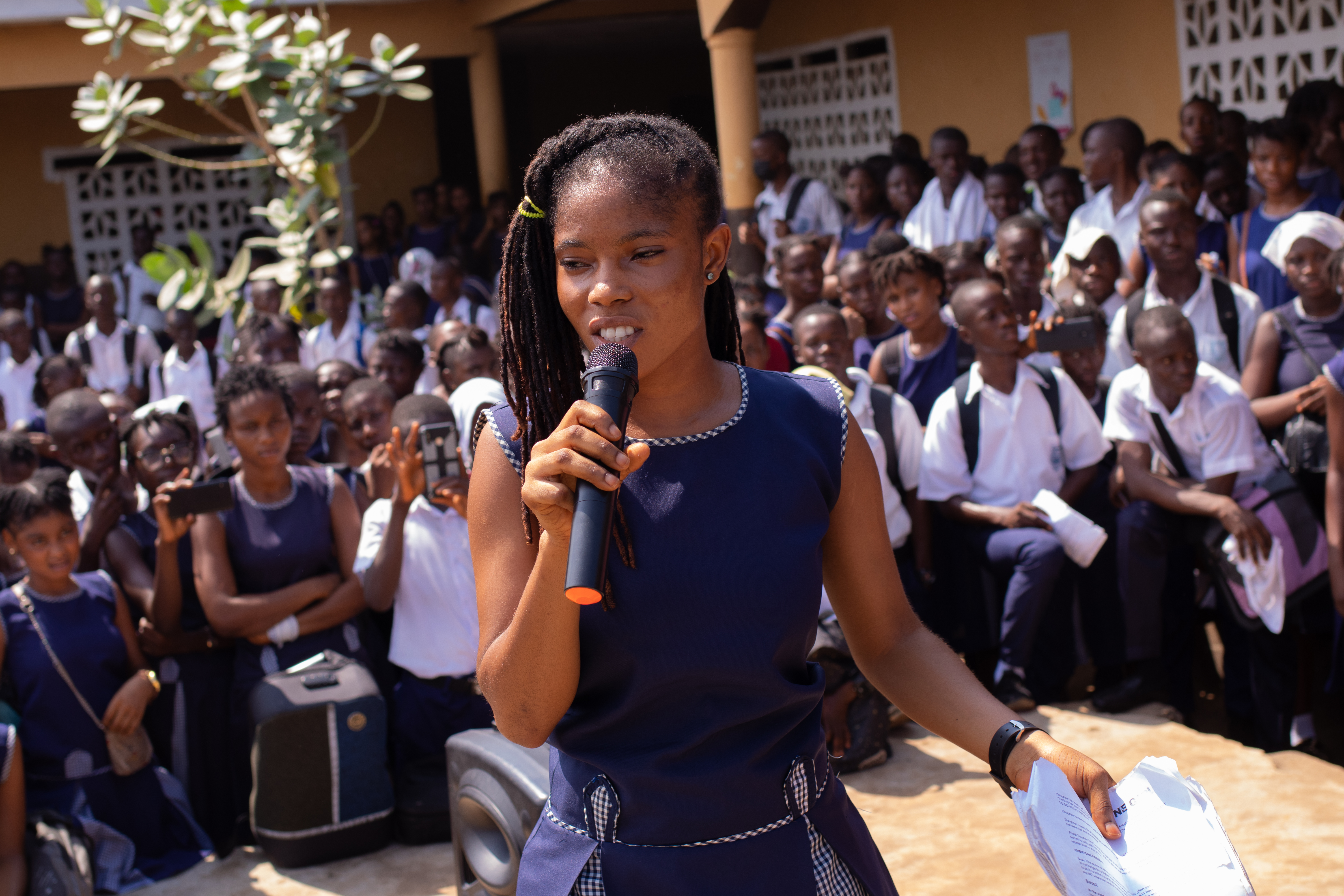 Sexual assault in the home is another theme we touched upon. At a community engagement meeting in Tonkolili, one of the members who works at the Family Support Unit (FSU) in the police department was speaking about how the domestic violence cases they deal with are often cases of abuse in the home by an uncle or parent or relative. We also touched on issues of abuse faced by boys. Boys don’t come forward with issues of abuse because they get laughed at and don’t get believed.

The community member working in the FSU also shared how most perpetrators of abuse or violence against women are men who’ve been abused as boys. It is a vicious cycle of abuse.

We shared information on how young people can approach community members, police, and focal teachers for support.

What were some of the reactions, responses and questions from the audience to the information that was shared? 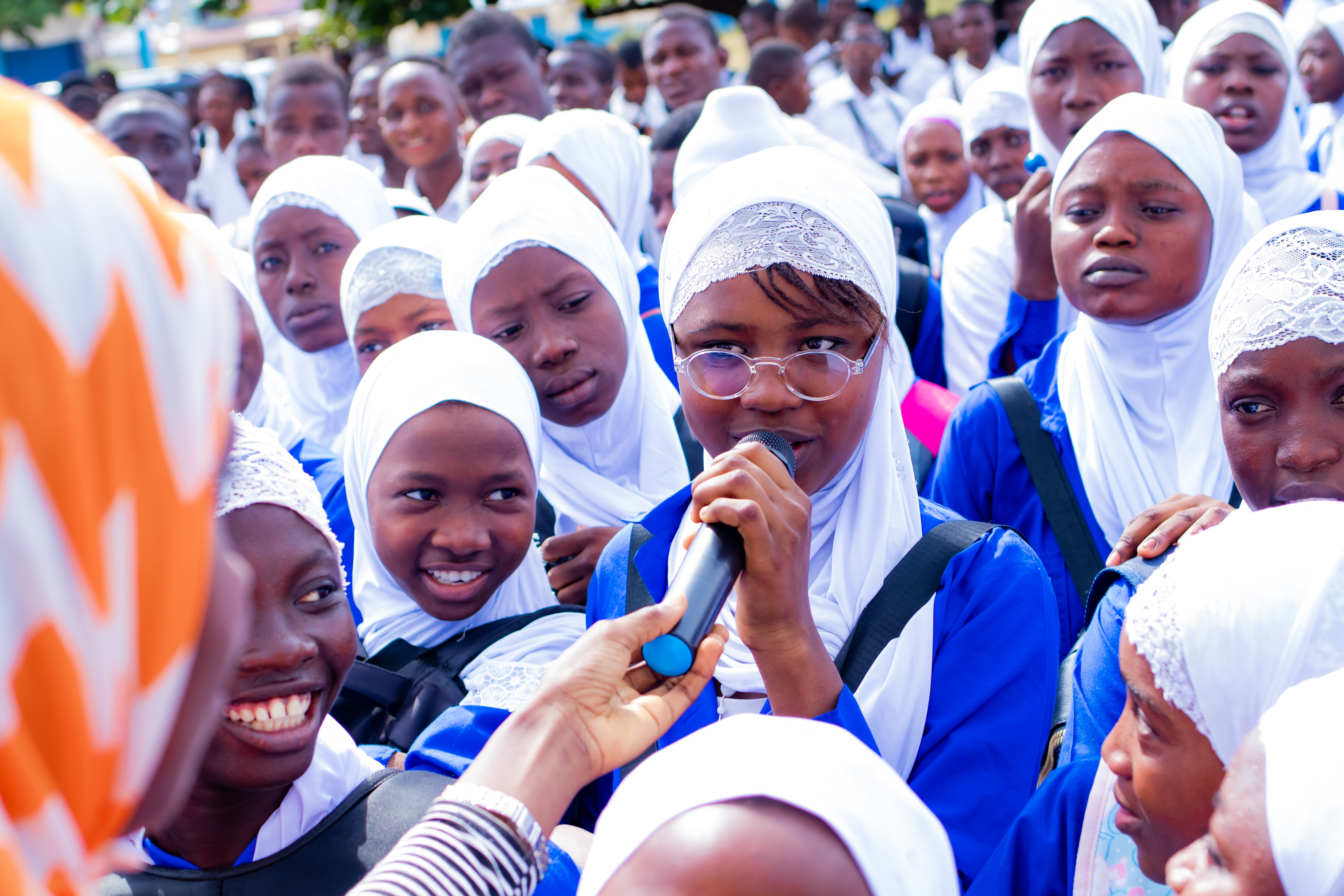 We went to 5 schools across three days in Tonkolili. We decided to go out of the bigger towns to the smaller communities and villages. In Freetown, we went to 5 schools in different communities in the eastern region. In one of the schools, the pupils had to take their benches out of class to bring to the courtyard so that they could watch us. Because there are no fences in the school, community members walked in and joined the audience, which was great! During certain scenes - when the girl says ‘no, it’s my body’ or when she says to the boyfriend ‘no, I do not consent’, the audience would cheer loudly. We could tell they’ve seen these issues happen around them. They were following the characters closely and supporting the girls. 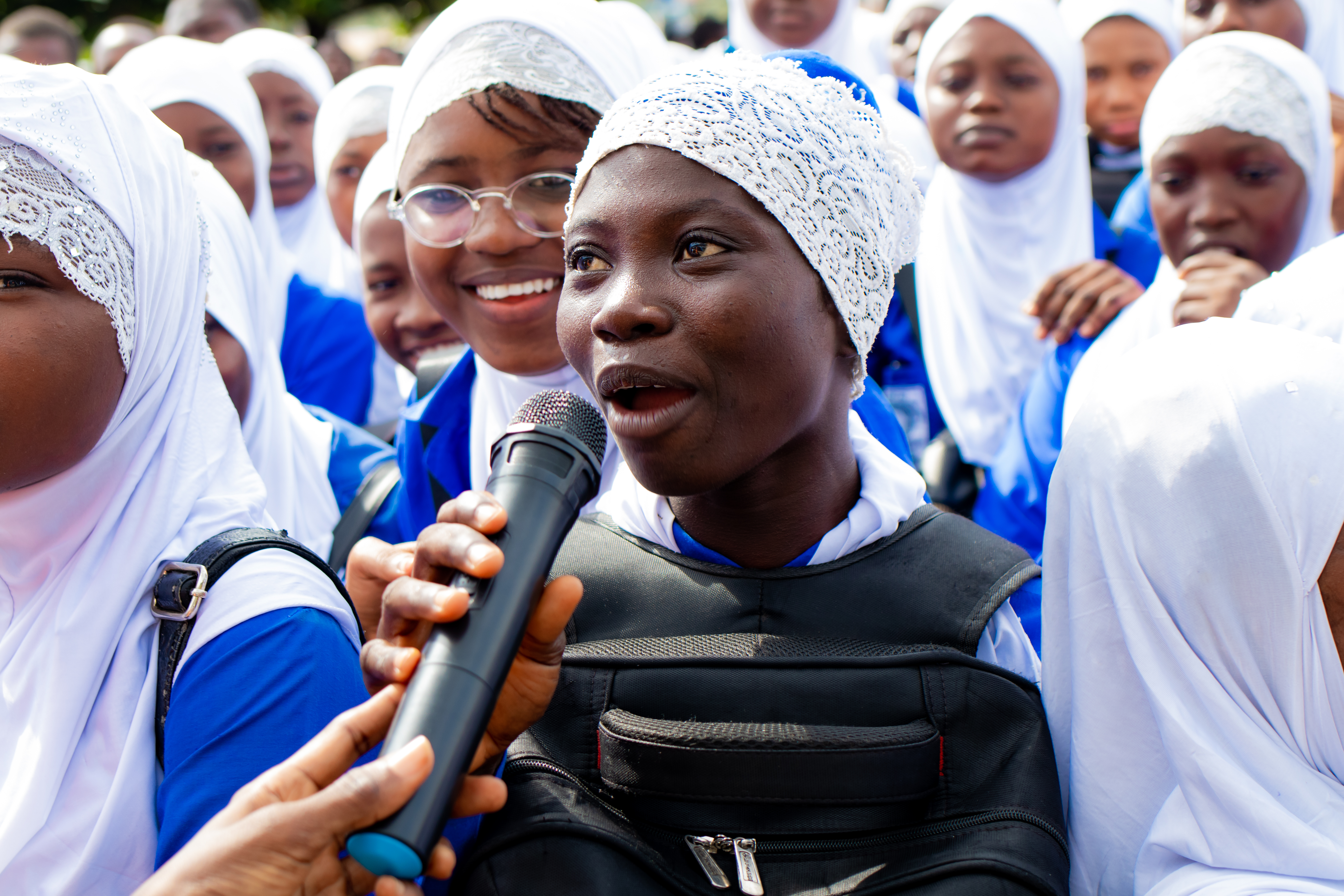 During the Q&A sessions, we had teachers ask questions as well. Community members asked us to clarify some themes. The students were shy at first but we encouraged them and it was always a good discussion. We got a lot of questions - how do we advocate? Who do we talk to? Who do I call if I don’t have a phone? We had discussions around where to go for help, focal teachers and committeemembers to talk to and a helpline number to call. We also discussed how we must advocate for more awareness and more support. 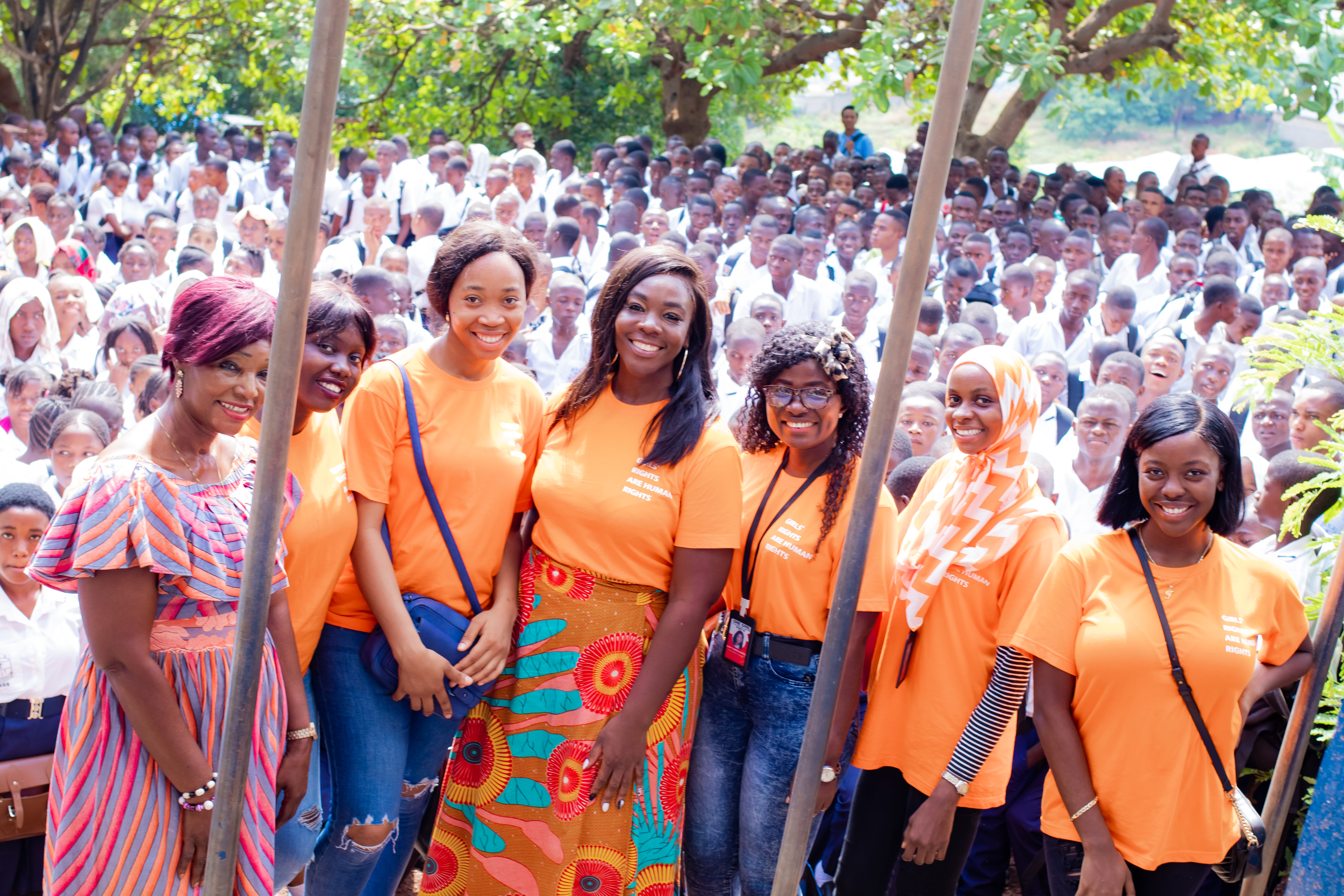 What were some of the learning we can take to future campaigns?

People have questions but they’re shy to raise their hand or speak publicly, so we must go to them and build trust. Having some of the teachers around was a bit of a setback for the students to be able to speak freely. Most importantly, there is a lot of work to be done. This conversation shouldn’t just end with 16 days, we need to go beyond.

We need to engage boys in this conversation also. They want to know how to help. They want to learn to do things differently. They ask us - 'Where can we come in and step in? What can we do in this fight against GBV?'

We acknowledge the First Nations People of Australia as the custodians and traditional owners of the land from which we advocate for improving access to quality education for girls around the world. We pay our respect to Indigenous Elders, past, present and emerging, and acknowledge and uphold their continuing relationship to this land. This is, was and always will be Aboriginal land.