Move over Madonna – there’s a new mononym in town. And she goes by the name of Malala. 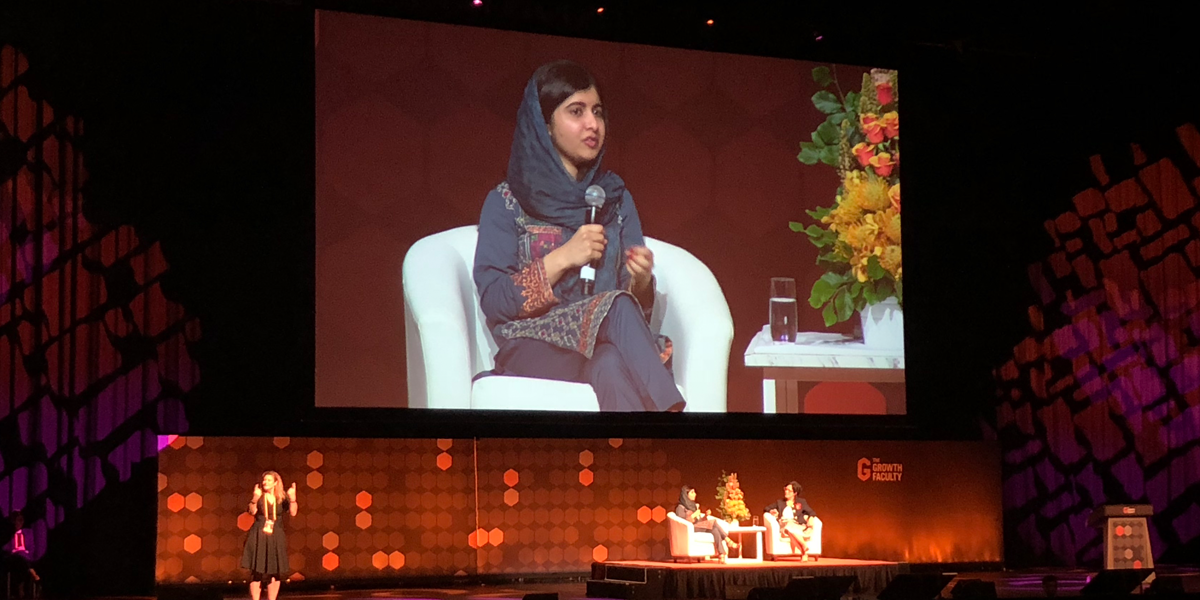 In December last year, I sat in a packed out convention centre in Melbourne waiting to hear some inspiring words from one of my personal heroes. It wasn’t Beyoncé, it wasn’t Madonna or Cher – it was a new iconic mononymous name. It was Malala.

It’s impossible to know how many times her name will be written today as the world celebrates the achievements of one of the most extraordinary young women of our time. Her grace, resilience, and wisdom have inspired millions and it goes without saying that for the One Girl community, she’s a hero. Today is not only the anniversary of her unforgettable 2013 UN speech on the need for gender equality in education – it’s also her birthday! 14-year-old Malala Yousafzai nearly died after being shot for speaking out against the repressive Taliban regime in her native home of Pakistan. But nobody could have guessed that such a brutal act of violence would transform the young Malala into a global leader. That instead of being shattered by the experience, she was emboldened – becoming more fierce, defiant, passionate and fearless than ever. “The Taliban shot me on the left side of my forehead. They thought that the bullets would silence us. But they failed. And then, out of that silence came thousands of voices. The terrorists thought that they would change our aims and stop our ambitions but nothing changed in my life except this: weakness, fear and hopelessness died. Strength, power and courage were born.” Today Malala is the global face of girls’ education. She heads her own charity, The Malala Fund, and travels the world as the voice of those who are not able to speak out for themselves. She is history’s youngest Nobel Peace Prize laureate and right now she is finishing her own education at Oxford University. As Malala’s profile has grown, she and her team have formed some powerful alliances. Last year her organisation issued a joint report with the World Bank entitled: ‘Full Force – Why The World Works Better When Girls Go To School’, where they showed that if all girls completed secondary school, they could add US$30 trillion to the global economy.

But perhaps more troubling are the facts behind that enormous dollar figure: 130 million girls around the world are out of school. And a staggering 1 billion girls are not receiving the kind of education they need to actively participate in the workforce of the future.

Because girls face unique challenges and barriers to education that boys don’t. The barriers are many and complex and include things like early marriage; early pregnancy; lack of access to hygienic sanitary products and facilities; or discriminatory cultural norms and practices. The list goes on but essentially, they are being left behind and locked into menial, unskilled jobs and the low wages and lack of job security that go with those roles. Quality education and the likelihood of employment afterwards is something that I — and I’m sure many other girls in Australia — have had the luxury of taking for granted in a country where 98% of girls complete high school. But 130 million girls around the world are not so lucky. Hearing the words of a confident and passionate professional who has spoken on some of the world’s largest stages was inspiring, and it lit a fire in my belly to pick up the baton and fight the good fight for girls everywhere! But what I also heard about in her own words, was the ‘everyday’ Malala. The big sister telling stories about her two annoying — but much loved — little brothers; the daughter whose cautious mother finds her international life so foreign; the daughter whose father has been her greatest supporter every step of the way; and the young woman who has just started Uni and doesn’t want her parents to know about the college parties she’s going to. Malala shared all these aspects of herself with her roomful of adoring strangers and left everyone abuzz because she could be you, or me – she could be any of us and she is all of us.

“Those 130 million girls around the world who aren't in school need me, they need me to speak up for them. I want everyone in this hall to think about how we can get these girls into school. We all have a part to play.

“To all girls, I hope they can hear me, we are with you and we stand for you. We will make sure that you get your right ... to decide your future. You are very brave and strong.”